The housing at Frigg consists of low-rise buildings with 2-4 storeys and galleries with access balconies, nestling in a small forested area between Hammarby Sjöstad and the shopping centre in Sickla. Frigg was built in 2002 and was originally located in Hammarby sjöstad. There is also an old, historic building in the area, Fanny Udde, which stands on a hill surrounded by very old and beautiful trees.

Phase out of housing due to temporary building permit

The land on which Frigg Sickla is placed has a temporary building permit that expires in September 2020. This means that by September 2020, the houses have to be completely removed and the land must be restored as it was before. We will begin dismantling in January 2020, which means that tenants living in Frigg Sickla must move out in December 2019.

If you move in to Frigg Sickla you sign an approval of waiver of security of tenure with your contract, which means that you will not be replaced with another housing when the Frigg Sickla is dismantled.

All rental agreements at Frigg Sickla terminates in December 2019. If you choose to terminate your agreement before that, it is a two months’ notice period, according to your contract.

Frigg does not have its own house caretaker’s office. You can find your office at our housing area Embla.

Activities in the area
Pictures 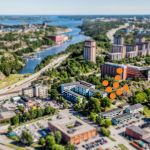 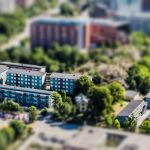 Equipment in kitchenettes
In the kitchenettes there is a a fridge with a cold compartment , cooking facilities and a microwave.

Geyser
At Frigg sickla everyone has their own geyser, warm water heater. This means that you have a limited liters of hot water (30 liters) at a time. The water amount is suitable for normal consumtion for one person. Once the hot water is finished, new water needs to be warmed up again, which takes about 30 minutes.

Number of floors
The buildings has 2-4 floors.

Elevator
Transportation elevator is available in the buildings with 3 or 4 floors.

Adaption for disability
The housing is adapted for disability to the extent that you can drive in with an indoor wheelchair and rotate it in the hall and wet room.

Other
Broadband fee, electricity, heating and heating of water is included in the rent. The building has direct-acting electricity.